Millions and Millions up for grabs 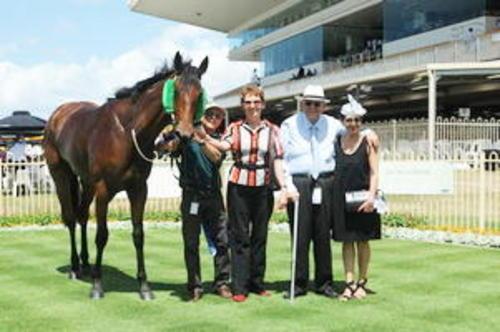 Nominations have been taken for Queensland’s richest racing event, the 2010 Magic Millions raceday on the Gold Coast.  The event is being held on Saturday, January 9 and a total of $4.6 million in prizemoney will be there for the taking.

Laming Racing has eight nominations, headlined by exciting two-year-old filly Ringa Ringa Rosie (pictured) who has had one start for one win in November.  She will be there to contest the feature race on the program, the 2yo Magic Millions classic, a race worth $2 million.

Just 12 months ago, Ringa Ringa Rosie was at the same Gold Coast complex as a yearling and was purchased by Laming Racing through the Emerald Thoroughbreds draft for a bargain of $46,000.  In just one career start, her earnings have already surpassed that figure.

To see her as a yearling, click here http://orion.sirecam.com/players/yearling.asp?Year=2009&Code=mmps&Lot=904

She will be back in action this Saturday in the Calaway Gal Stakes at Eagle Farm, a Listed race for 2yo fillies over 1000m.

Other horses entered for the raceday are Hidden Babe, Fly With Me and Pedal Pusher.

This is a timely reminder for all current and potential clients, Laming Racing will again be active at the 2010 Magic Millions sales carnival with the aim to find a new Ringa Ringa Rosie.  The catalogue is online through the Magic Millions website, so start looking and if anything takes your fancy, make sure you contact us.