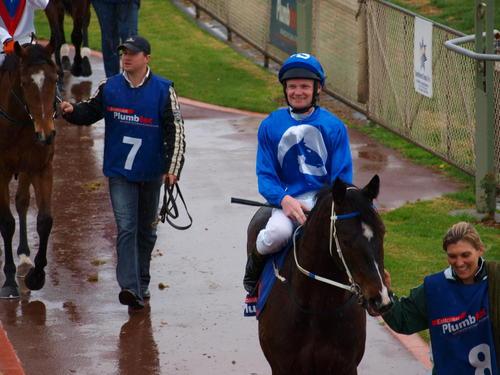 With a new year comes new opportunities and 2010 has started off in great fashion for Laming Racing.

With no metropolitan racing in Melbourne on Saturday, Geelong hosted an all-showcase meeting.  Promising three-year-old I’m The Fiddle was resuming from a spell and having his first run as a gelding.

There was plenty against the son of Tale Of The Cat going into the race, first-up over 1500m, a wet track and a track that appeared to be favoring leaders.  Throughout the run jockey Brian Higgins ensured that his horse was relaxed and gave him every chance to run home strongly at the finish.

Turning into the straight it looked as though he had plenty left to give as he made his run down the outside of the track in the inferior ground yet was still good enough to win comfortably.

It was a great thrill for the owners Scott & Linda Brown, Geoff & Virginia Cook, Michael Hibbert, Marilyn Yates, Justin Sciortino and Jenny Laming.  I’m The Fiddle has always promised to be a good racehorse, and hopefully the fun is only just beginning.

With a bit of staying blood in his pedigree, I’m The Fiddle will keep stepping up over more ground with a view to possibly a Queensland Derby in the winter.

Another horse who may join I’m The Fiddle in that three-year-old Derby is Queensland based Face The Front.  He went around in the Starcraft Handicap over 2200m at the Gold Coast on Saturday, a race worth $100,000.  After settling at the rear, he made a long sustained run to finish fifth, just over two lengths from the winner.  The derby trip will be no concern and he has shown that he can handle all types of surfaces.