Crossthestart caps off a great day 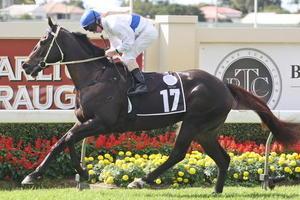 Emerging stayer Crossthestart took another gigantic step forward with a strong win in the Group 3 Chairman’s Handicap at Doomben over 2020m.

Crossthestart had been coming along well since his first run back in Brisbane on an unsuitable wet track and we were confident going into Saturday’s race.  Those hopes were dampened when he was given barrier 17 which made the task a lot more difficult.

The wide barrier didn’t seem to concern top jockey Chris Munce who decided early in the race to send the son of Cape Cross around the field off a muddling pace and put him in the lead.  He was challenged at the top of the straight however he was always travelling well and kicked clear to win by two lengths.

Crossthestart is well on track to give the Laming-Munce combination a third Brisbane Cup in a few weeks time.  His record in Brisbane is impeccible since joining Laming Racing, ten starts for five wins and almost $200,000 in prize money.

The victory completed a running double with two-year-old filly Ringa Ringa Rosie taking out the Listed Hampden Stakes with a brilliant first-up performance.  It was great to see our hard working and dedicated staff from both states enjoy some more big race success.