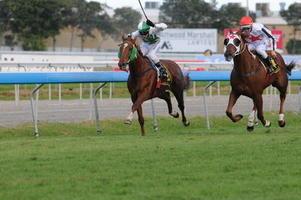 While most of our attention was focused on the feature races at Eagle Farm, Laming Racing recorded a very fulfilling victory down the road at the Gold Coast.

Chiefcomingfirst, a rising eight-year-old who has had to battle through many injury problems, finally had some luck go his way and he went on to record a comfortable victory in the Class 3 2200m event.

Sent out as the $4 favourite, jockey Daniel Griffin settled Chief midfield on the rails and he never went around a horse.  Once the gap opened in the straight, Chief darted through to win on the line by just under a length.

Chiefcomingfirst now takes his career earnings to just over $80,000 and he will now head south to Melbourne to embark on a jumping career.