Win? Indeed I Can 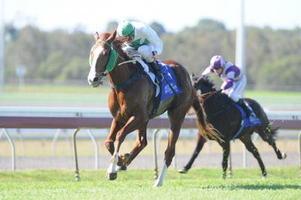 It was a case of start number thirteen being the luckiest for emerging stayer Indeed I Am on Sunday at the Sunshine Coast.

After twelve career starts that produced four seconds, Indeed I Am broke his maiden status with a comprehensive victory over 1800m, winning by four lengths.

After jumping from a wide barrier, top jockey Jim Bryne sent the son of Iglesia forward and sat behind the leader.  Once he entered the home straight, Indeed I Am cruised up to hit the lead and ran away to record an easy victory.  The win suggested that there are plenty more in store for the four-year-old as he continues to step up in distance.

Indeed I Am was bred by Laming Racing and is the first foal out of the mare Deed Poll.  Deed Poll only had a modest career on the racetrack with her best result being a second when ridden by our own Richard Laming in his short stint as an amateur jockey.