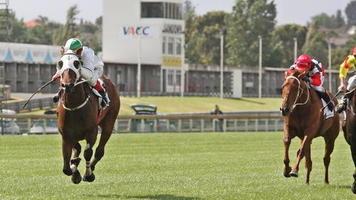 Most southerners will think the title of this article is a bit of a joke with the winter-like conditions that have plagued Melbourne throughout the spring and early part of summer.

However, further north in Queensland the temperature is up where it should be and the summer racing carnival is gaining momentum. Although there is still plenty of rain around, it hasn't been able to dampen the quality of racing with such great prizemoney on offer.

WIth just over a month before the Magic Millions raceday on the Gold Coast, the lead-up races are attracting plenty of interest from all over the country. This Saturday, Laming Racing will be represented by three runners at the Eagle Farm meeting.

In race 3, Lady Mary will make her racetrack debut. It was just under a year ago that she was purchased as a yearling at the Magic Millions sale and she has done everything right in the lead-up to her first race start. Her sire Dane Shadow has done well in his short time at stud and the dam side has some strong two-year-old form to suggest that Lady Mary won't be wasting much time when she gets to the races. She lines up in the listed Calaway Gal Stakes, a race worth $100,000 and will be ridden by Jim Byrne.

In the following race, Eskimo Dan (pictured) lines up in the Quality Handicap over 1600m. After resuming from a very lengthy spell three weeks ago, Eskimo Dan will be much better for the run and we expect improvement this week. He is likely to still need another run however he has done well since his first-up run and he looks well. Already a group 3 winner, he has been a great asset for the stable over the years. Michael Cahill will take the ride Saturday

Race 5 rounds out our team for Saturday with a new acquisition to the Queensland stable, Play Just For Me. After an excellent run down the straight on Oaks Day at Flemington, Play Just For Me was sent up to Queensland for the carnival. She has been given a five week freshen and is ready to run well. She began her career in Queensland winning her first start before heading south. She is ready to run a great race over the 1300m and has the bonus of Jim Byrne riding.

Interestingly, Stravinsky's Image who was a city winner for Laming Racing and a full sister to Play Just For Me will have her first foal go under the hammer at the upcoming Magic Millions sale. A bay filly by Dylan Thomas will be sold so to anyone who has followed these two mares over the years, make sure you mark her down to inspect at the sales.

Good luck to the team on the weekend, and especially to the owners. Hope to see you all at the races soon