On Face Value has a night out in town 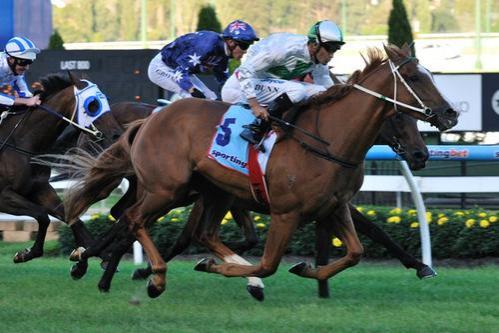 After having three starts as a two-year-old, On Face Value returned from a spell as a gelding and recorded his maiden victory first-up at Stony Creek. After solid efforts in higher grades, he then found his right class and distance on Friday night and became a city winner.

On Face Value was stepping up to the 1600m for the first time in his career and he relished the rise in distance. Given a perfect ride from in form jockey Dwayne Dunn, On Face Value got off the fence at the right time and reeled in the leaders in the straight.

Congratulations to winning owner Jenny Laming who walked away with more than $50,000 in prize money after the Super Vobis bonuses. On Face Value now takes his career earnings to just under $70,000 in only seven starts.

Special thanks must go to Taron Clarke Photography who took this action photo of On Face Value from Friday Night. There are some great galleries on their site, feel free to browse at http://www.taronclarke.com/

Well done to everyone involved in the stable.