The doctor is number one 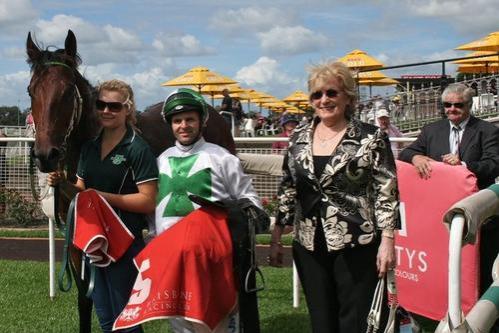 Two-year-old colt Dr Ichi made it two wins from only three starts with an impressive victory on Anzac Day at Eagle Farm.

The son of first season sire Dr Green was having his second run back from a spell after winning on debut at the Gold Coast in January.

Leading rider Larry Cassidy sent Dr Ichi forward to sit second in the run and once they straightened up, he quickly put the race beyond doubt. He went on to record a solid win by a length and three-quarters.

As mentioned, Dr Ichi now has two wins from only three starts and seems destined to reach bigger heights. He will be aimed at some of the lucrative black-type races during the Queensland winter carnival.

He has now chalked up $68,500 in prize money which isn't bad considering he was only purchased for $32,000 at the Gold Coast National yearling sale last year.

The win was made even more special as it was top jockey Larry Cassidy's 2,300th career win. Larry has been one of our favourites over the years and to share this moment with him meant a lot to Bevan and winning owner Jenny (pictured here)

Many thanks to Dan Costello for this winning photo. He has a wide range of excellent photos that can be viewed on his website www.racingwrap.com