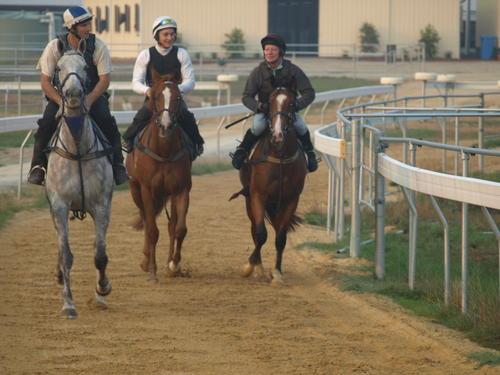 As we have mentioned on this website before, our stable is not afraid to travel a little further than usual to find the right race for our horses.

This was again highlighted on Tuesday when we sent Secret Tune up north to Mackay to notch up her first victory in the 3yo Maiden Plate over 1050m.

After making her debut at the Gold Coast back in January, she was sent for a brief spell.  Returning with a couple of solid trials under her belt, the daughter of Hidden Dragon jumped from the widest barrier and was forced to do a little bit of work early in the race to get across outside the leader.

Once the field entered the straight, jockey Dale Missen asked for her to give another effort and she managed to fight off the leader and win by a head on the line with a further three lengths to the third horse.

While we had to travel a little further, the prize money was definitely worth it.  Including the QTIS bonus, Secret Tune earned $13,500 for the victory which is a terrific result for her owner Jenny Laming.

The victory rounded out a good long weekend for the stable.  Crossthestart ran a very good race in the Listed Members Handicap.  He finished fourth beaten only a length and is right on target to defend his Brisbane Cup.

Play Just For Me added some valuable black-type to her name with a gutsy second in the listed Oakbank Stakes in South Australia.  Dr Ichi scored an impressive victory at Eagle Farm on Monday and Sea Skye came storming home for third on the same day.

Well done to the whole team!