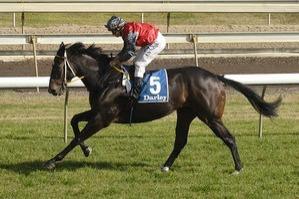 Statistics will show that once a horse breaks their maiden status, the percentage of horses who win at their very next start is extremely low.

So for Our Recidivist (pictured) to win his maiden at the Gold Coast and then back it up with an even more impressive win on Friday at Ipswich is a great feat. Not only has he chalked up two in a row, he's done it at his first two starts for our stable.

The four-year-old son on Al Maher arrived at our Queensland stables in early January after a stint in New South Wales and he has certainly settled in well.

Winning over 1400m at the Gold Coast first-up, he stepped up to the 1666m distance at Ipswich. Sent to the front by jockey Jim Byrne, he enjoyed a comfortable run before putting a big gap on the field when entering the straight.

Byrne kept him going to record an impressive 1 1/2 length win. The move to send him further north has been a great one for his owners Bob Green and Nick Posa. Our Recidivist has already amassed $14,300 in his two starts for our stable and he doesn't look like stopping there.

Bigger plans are in store for the gelding down the track, but in the meantime he will be on the quick back-up on Monday at Ipswich over the same trip.

Well done to Bob and Nick and best of luck for the rest of his preparation.