Hidden Babe makes the trip well worth it 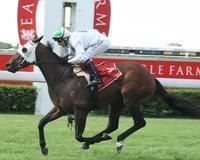 When there are so many racecourses closer to Jacobs Well than Rockhampton (8 hours away), it needs to be a good reason to head there.

Luckily it was the Rockhampton Cup meeting and the prize money up for grabs was very enticing.  The carnival was held over two days and after a solid third placing from Molly's Way on day 1, it was left to Hidden Babe (pictured) in the Class 3 Fillies and Mares 1200m, and Sea Skye in the Cup over 1600m.

While Sea Skye ran a great race to finish strongly from back in the field off a slow speed, Hidden Babe stole the show with a tough on-pace victory.  After jumping well from her inside draw, jockey Ashlee Mundy had her settled just behind the leaders and once they entered the straight she took the lead and was never headed.

Hidden Babe now takes her career earnings to more than $30,000 in just thirteen starts and that was her second victory.  She has been a good result for her owners who paid just $20,000 for her at the 2009 Gold Coast Magic Millions Yearling Sale.

Congratulations to the winning owners Bill Benson, Jenny Laming, John and Jan White and Gerry and Stamatoula Carmody.  The Carmody's have not wasted any time in replacing their former star filly Ringa Ringa Rosie who was sold last month.  Hidden Babe is their first runner since the sale and let's hope their good luck can continue.

Also well done to jockey Ashlee Mundy who is currently enjoying her second stint in Australia.  She relocated in 2009 from New Zealand to work in our Jacobs Well stables and after returning home in 2010, she is back for another crack and has started off in great fashion.  This is her first winner for our stable.