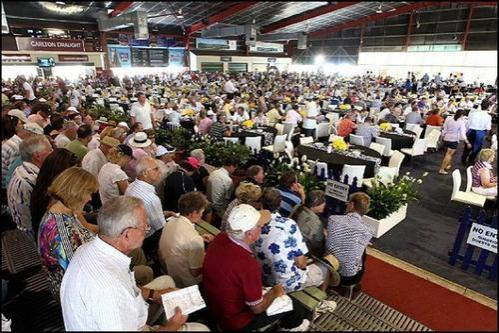 This January 11th -15th, the Magic Millions Sales Complex at Bundall on the Gold Coast was full of the who's who of racing. All the big names were there running their highly trained eyes over the horseflesh on offer. Searching for candidates that could make tham a big profit in as little as 12 months time.

With yearlings bought at this sale eligible for lucrative stake money and bonus' offered at the Magic Millions Carnival run each January at the Gold Coast as well as Carnivals run in Adelaide, Perth and Rockhampton. Races at these meetings are restricted to horses purchased through Magic Millions sales only.

The race meeting held at the Gold Coast this year attracted 17,000 racegoers through the gates to witness the main race of the day being the 2 million dollar 2yo Classic. This controversially won on protest by Dreifontein.

This raceday always guarantees a great atmosphere and plenty of excitement but with large crowds the facilities can become somewhat stretched. A revamp of the venue is being planned with the state government alloting $35 million for upgrades.

Once the races are over for the day, it is then just across the road that the action continues with the evening session of the sales getting under way.

Bevan attended each day of the sales and came home with a lovely filly by Dehere out of the mare Fly Me Home whom he used to train. This being her 4th foal with all her previous three winning 2yo races, this filly looks an early type on pedigree. He also bought a Duke Of Marmalade colt who is out of a Fusaichi Pegasus mare. A good strong precocious colt he looks a nice 2yo proposition and Bevan expects him to be up and running early. The two of them will go to the paddock for a month before being broken in.

If all goes to plan, we look forward to cheering them on in the big races this time next year!