Sale Along To Victory 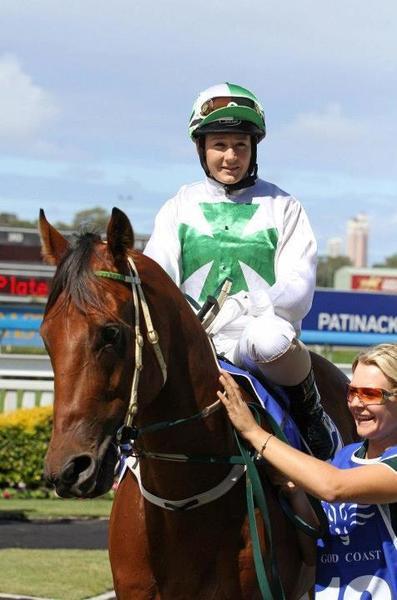 With a lot of the dominant horses in the stable having a well earned break over the summer months, they have now been kicked off their sun lounges, the beach towels and sunglasses have been put away and it's back to work!

The first one to greet the judge was Coup Rayvan on February 4th at the Gold Coast. In a race over the mad dash distance of 900m, starting short priced favourite he didn't let the punters down. Then backed it up with another win over the same distance on March 31st. After being a little slowly away, he quickly gathered speed, got a lovely rails run and scored by a long neck. Promising young apprentice Tegan Harrison steered him to victory on both occassions.

Next was Sale Along, breaking his Maiden, also at the Gold Coast on April 14. Ridden by Ashlee Mundy (pictured) over 1400m, he flew the barriers, Ashlee eased him back a little to be just behind the leaders and with a run presenting itself she stuck to the rails and got him home by a very narrow margin in a photo finish.

Stable star Kar Ma Te also began his preparation at Doomben over 1350m on April 4th. With the race being too short for him to be competitive, it was a nice stepping stone to increase his fitness for longer more suitable races coming up. After being beaten for speed as expected, Kar Ma Te finished the race off brilliantly flashing home late to finish 7th. Proving he has come back well after his Summer vacation he looks on target to be competitive over the Winter Carnival.

Whilst the four legged team were reclined sipping on their carrot smoothies complete with  little umbrellas, Bevan was busy expanding the team at the various yearling sales which were being conducted. One of his most noted buys is a half sister by Nadeem to once stable star Ringa Ringa Rosie bought at the prominent Sydney Easter Sales. There are shares still available in some of the new purchases so for anyone interested or wanting more information on whats available please call 0359 989 188 or 0447 998 188.