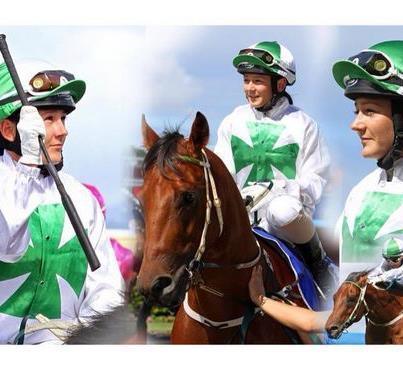 It is with great sadness that I write of our beloved friend, workmate and important part of the Laming Team Ashlee Mundy after a race fall at Kurow Races yesterday in N.Z. With the only comfort coming out of this terribly tragic incident is that she was doing what she loved.

Ashlee's successful career began in 2004 kicking home her first winner in August , another 241 winners in N.Z followed including the 2008 Riverton Cup and the 2009 Dunedin Gold Cup as two of her highlights.

Deciding to broaden her horizons she began to travel to the Gold Coast on stints before making it her home permanently. In Australia, the opportunities were more limited, being somewhat of an unknown jockey but she still managed to ride 43 winners in a relatively short period of time. Basing her self on the Gold Coast she was soon the main rider for the Laming Racing Team doing a lot of trackwork and general work around the stables. Her relaxed unflappable nature was an asset to her for raceday pressures and often flowed through to the highly strung horses she was aboard.

Each year she would return to N.Z around Christmas time to have a working holiday where she was a prominent rider on the South Island Summer Circuit, a festive, easy going, fun group of races that go from one track to the next in a tour around the South Island.

Although this being an annual pilgrimage in her home country, this was the first time she had spent Christmas with her family in 10 years, she had excitedly spoken of in an interview on Boxing Day. Raceday commitments often preventing this in years gone by for the dedicated rider.

Ashlee was a beautiful person that would do anything to help anyone, Her love of all animals shone through hugging whatever creature she could get her hands on, often photographed with her cheeky smile.

Always happy and smiling with her infectious personality she was a very popular young lady that had a very large circle of fiends. One of which being her young workmate Nikki White who considered her a sister with many photos of their antics being posted on social media and Nikki strapping majority of the Laming horses that Ashlee rode.

Ashlee will be greatly misssed, and to have a young lady lost in the prime of her life is devastating to all that knew her. This heartbreaking accident  being yet another reminder of the dangers our riders face often on a daily basis as part of their work. So Shine bright like a diamond in the sky, beautiful girl. Although only on earth 26 years, you made a big impact on all  that knew you.

Sincere condolences, thoughts and prayers to all Ashlee's family and friends, from the Laming Team.

*I would also like to add that Ashlee's family made the most selfless and genorous decision possible and given hope to some people that potentially had none by donating Ashlee's organs. The greatest gift one could give, the gift of life, and her big heart will continue beating.