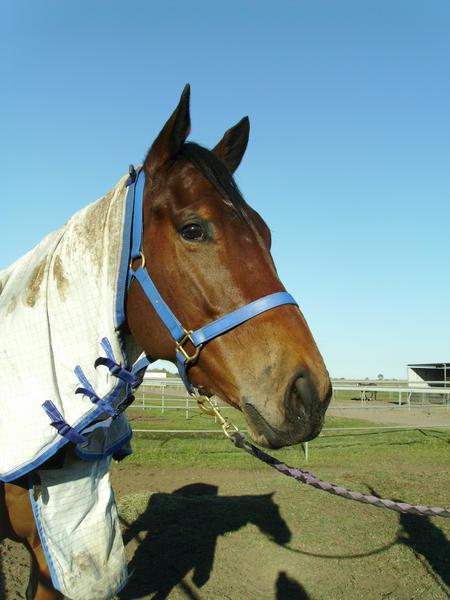 The rain has finally stopped, the sun has returned and the pendulum seems to be swinging once again in our favour.

Beginning with By Order at Mornington August 30, confidently ridden by Steven Arnold he managed to just hold on to score a well deserved win. Unlucky to run into a promising type last start at Cranbourne and not being able to get into the clear at all the start before that the little horse with the big heart finally managed to break his maiden status. Racing at Mornington again this Tuesday  we look forward to see if he can continue his winning streak.

Also to salute the judge was Fastnet Cove (pictured) having his first start at the Gold Coast yesterday. A half brother to former stable star Face Value, he topped the Magic Millions Sales in 2012 at $370K bought by Bevan but failed the scope, which funnily enough hasn't seemed to have effected him at all.

Breeder, Dr. O'brien decided to keep him and gave him to Bevan to train after previous success with the breed. A big heavy boned horse he had to be gelded as apart from becoming too large he also was more interested in his female counterparts than running fast.

Ridden by apprentice Matthew McGuren who took 2kgs off his back, from barrier 1 over the somewhat unsuitable distance of 900m, as he is not your typical jump and run horse, he managed to muster speed to run away to a relatively effortless win by 1 length. He has recovered well after his first run and will only benefit from the experience after being a little 'green" and winning on raw ability.

Almost making it a double for the stable on the day was the inform Lamichi, narrowly being beaten to run 2nd in a Class 3 over 1800m. The now 7yo mare has been racing very consistently of late, finishing in the placings in 4 of her last 5 starts.

At Flemington on the same day was Sea Skye who was also narrowly beaten and the somewhat unlucky Innocent Lady who ran 3rd in an earlier race over 2000m for the girls, she too has been very consistent. It would be lovely to see those horses in the winners stall soon for all their connections.