Welcome To The World. 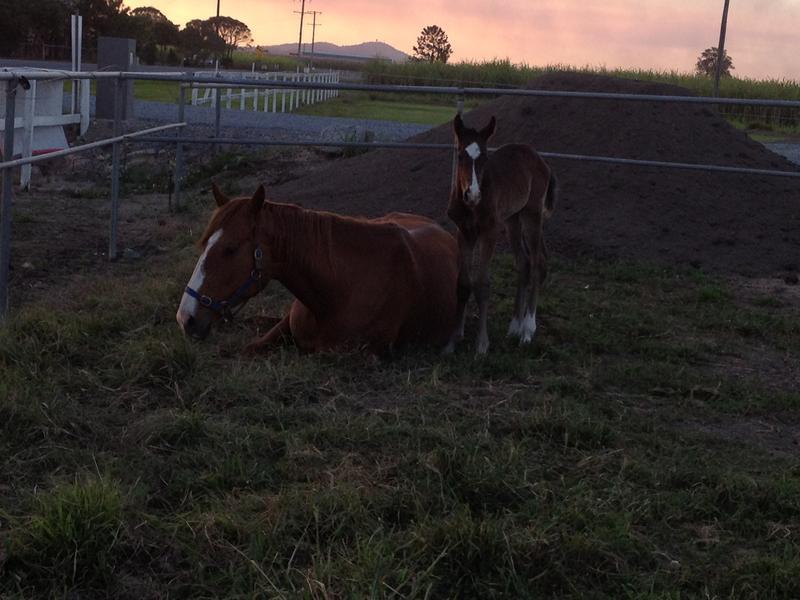 Spring is well and truly upon us and its the time of year that all the future stars of the turf come into the world. Some having an easier start to life than others but thats life and its natures way of weeding out the weaklings. As it is with humans, each mare is different and each handles the situation in their own individual way.

After a gestation period of 334 days on average, most mares give birth in the cover of darkness, especially on a stormy night but as we haven't had any decent rain for months, Hasty Girl, (pictured) couldn't hold on any longer and gave birth at 9.30 in the morning. She had a lovely colt by Red Element affectionately known as Rodman. The only colt out of 8 foals born for the stable this year.(There are another 2 foals due next month so you never know.) Colts are carried on average 2 1/2 days longer than fillies.

During the delivery, the foals front feet are the first to appear, usually one foot in front of the other, then the head, chest and belly. The foals hind legs will remain inside the mare for a couple of minutes while a large quantity of essential blood is transferred from the mare to the foal via the umbilical cord.

A healthy foal will be standing on spindly long legs in around 30 minutes and suckling from the mare within 90 minutes. As in humans, the mares first milk that she produces is called colostorum and is full of antibodies and energy. The foal only absorbs these antibodies in the first 12-24 hours of its life and it is important that it recieves at least 250ml in the first 6 hours.. It takes 6-8 weeks for the foal to develop its own immune system.

If the mare is being bred from again, she usually goes back to see the stallion 8 days after birthing. Poor thing! And the whole cycle begins again. Her current foal usually stays with her for 6-8 months before being weaned and seperated. All the young weanlings usually go into a paddock together to make the process easier and so as they're not alone. After a couple of days they have forgotten all about Mum and are busy getting on with frolicking with their friends.