The Winners Keep Coming For Laming Racing In December 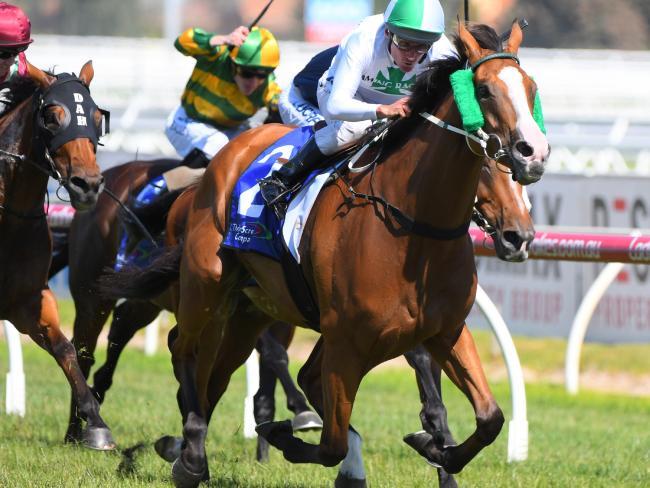 The highlight for December thus far for the Team at Laming Racing was when our 5-year-old Mare by Not A Single Doubt, Payroll took out the bigscreencompany.com.au Lord Stakes with a perfect ride displayed by Damien Oliver to score the Listed event over 1700m, when defeating Jacquinot Bay and Coldstone with a race time of 1:41.76 recorded.

A trip now beckons to the Gold Coast for the $1 million Magic Millions Trophy after the emphatic victory following the Listed Lord Stakes at Caulfield.

Payroll posted her fifth win and second in a row in a near-record time over 1700m, leaving Payroll the opportunity to head to Queensland to chase the biggest purse of her career.

“She ran third in the Magic Millions (to Stratum Star) last year and she’s a bigger and stronger mare now and when you’ve got that sort of money on offer, you’ve got to look at that,” trainer Richard Laming said.

“She’s taken a while to hit her straps, but she’s maturing and coming of age.

“She’s in great form,” Oliver said of Payroll, “Full credit to Richard and the team, they’ve got her going in career-best form and it’s all systems go to the Gold Coast.”

Other winners for the month saw four-year-old Brown gelding by Danzero out a Secret Cove in Zero Secrets chalk up win number one at start number 12 for connections when taking out the 7 furlongs (1400m) at Cranbourne on December 16 with Ms Jessica Payne landing the prize in advance of The Charmer with Tilbury, the next runner in, in a time of 1:25.48 with the last 600m in 36.26 to score a convincing three-length victory in the Tab Multiplier Maiden Plate.

Three days earlier at Mornington saw Raymax team up with the inform Chris Caserta to take out the Musk Creek Farm Plate over a mile with the runner landing in advance of Alnaas by 0.75 lengths behind the Laming prepared runner with Haliman the next to arrive.

The race clock was stopped in a time of 1:37.57, with the last 600m in 36.41 to chalk up win number 1 at start number 4, with two placings earning connections career prize money so far in excess of $24,000 from the honest 4-year-old gelding by Rothesay out of the dam Madam Bubbles.

Up north in Queensland, the stable converted race seven on the Ipswich card on Friday, December 22 when Swiss Love took out race three in the Muckert’s Sawmill Fillies & mares class 1 handicap over thousand metres with Jim Byrne piloting the runner to a 2 length victory in a time of 1:05.23 with the last 600m clocked in 34.31 leading from barrier to box.

The win chalked up win number two at start number seven for the three-year-old Swiss Ace commodity out of Notre Amour, improving on a last start 6 of 10 with a near side bubble cheeker gear change.

The Final Acceptances For 2017

The stable wishes all connections and supporters a healthy and happy introduction to 2018 and hopefully the team can continue to churn out winners and be competitive throughout the venues that will be visited by the Laming Racing Team in 2018.