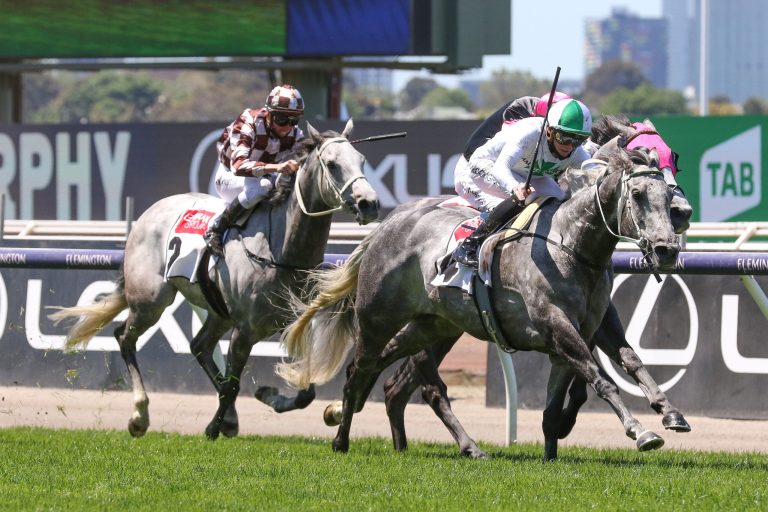 The team excelled with only a small field of acceptors between the two Laming stables throughout the month of October with only 10 runners churning out 4 winners, highlighted by the early November winner on MELBOURNE CUP DAY of Excelman who took out the SUBZERO in the all grey event, piloted perfectly to a well scheduled plan by Blaike McDougall, and an inaugural winner for the Bevan/Melissa Laming combination up North.

Trainer Richard Laming put a circle around the Subzero Handicap (1400m) four months ago for his grey Excelman (NZ) (Reliable Man) and he was delighted that his plan came to fruition as we’d targeted this race at Flemington on Melbourne Cup Day for some time. The New Zealand-bred gelding was given an armchair ride by jockey Blaike McDougall after drawing the 1 alley, to enable the duo to follow the speed behind pacemaker Naval Envoy to break down the runner in the final strides to win by half a length.

Trainer, Richard Laming told owners in the morning of the race that this is the best iv’e seen him heading into the SUBZERO and he’s efforts did not disappoint.

Hoop Blaike McDougall said “For the last month I have been heading out to Cranbourne and jumping this fella out and he has been going terrific,” McDougal said.

Excelman was bred by Westbury Stud principal Gerry Harvey, who stands his sire, Reliable Man, at his South Auckland farm.

Out of the Exceed and Excel mare Glory Run, Excelman is a half-brother to the Group One performed Night’s Watch.

Five year old bay gelding, The General chalked up win 4 at start 10 when competing at Moe on 15 October over 1200 m when claiming apprentice Kiran Quilty piloted the runner from barrier 12 to score a confident 1.5 lengths victory when beating home Mariamia from Astronomicelle in a time of 1:14.46 guided to perfection positively by the claiming hoop to score on a heavy 8, Showing great quality to jump back to the winners stall second up for the preparation.

Six year old bay gelding, Kaiberry scored for connections but introduced the new training combination of Bevan and Melissa Laming from Jacobs well to score at the Gold Coast on 30th of October when contesting over 1800 m in a class 4, racing on a good 4, landing the prize in advance of Dorset Coast with Michael Hellyer piloting from barrier (6) in a forward position to score by half a length in a time of 1:50.13 at odds of $3-1, Neptunes Choice with the third runner to arrive.

Swiss Ace out of Mrs Kennedy in four year old bay gelding commodity,  Mr Roger saluted for connections at Moonee Valley on the first day of October with the runner having start 11 to produce win 3 over 1200 m in fine fashion.

Good luck to all owners and their horses as we count down to racing in the second last month of racing this year.