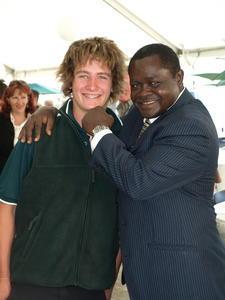 With only a few days left in the year, it is time to look back at the events of 2009.

After months and months of hard work, our state-of-the-art Victorian Training Complex was opened by the mayor of Casey Geoff Ablett at our open day.  The open day was highlighted by a special visit from champion boxer Azumah Nelson (pictured with employee Matthew Brown)

The Laming Racing website was launched earlier this year and it proves to be one of the leading websites in the racing industry.  It features regular articles on our horses and provides a great information source for all of our owners.

We were active at the major yearling sales this year and managed to buy some great types by proven stallions at bargain prices.  We will again be looking for future champions at the next round of sales which begin at the Gold Coast in only a few weeks.

On the track, we started to build an envious record by winning the group 3 Eclipse Stakes for the second year in a row with Bashful Girl.  Bashful Girl was only in her first prep for our stable and will be back in the Autumn of 2010 chasing more black-type success.

Phaze Action added the listed Andrew Ramsden Stakes to our black-type list with a strong win at Flemington in May.  He is back in work and is headed towards the Adelaide Cup in March.

The year was rounded out with a couple of Christmas parties.  The Victorian staff enjoyed an event that is fast becoming bigger than Christmas itself.  The karaoke machine was given a good workout, however there were no performers worthy of a million dollar recording contract.  The Queensland staff also enjoyed a night out last week with plenty of celebrations and good stories.

As we head to the break, there is not much time to put the feet up and relax.  We have plenty to look forward to with a host of unraced youngsters that are very close to making their racetrack debut.  We also have the exciting two-year-old Ringa Ringa Rosie who will be hard to beat in Saturday's TJ Smith Stakes over 1200m at Doomben, her final lead-up race before the Magic Millions Classic on January 9.

From all at Laming Racing, we would like to thank all of our loyal owners and supporters for a great 2009.  Best wishes for the festive season and let's hope that 2010 is bigger and better.