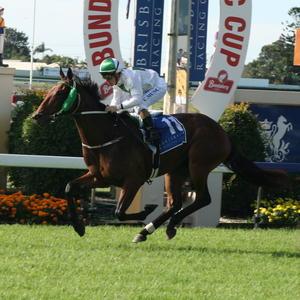 This Saturday at Eagle Farm will see Laming Racing represented in three of the season's biggest races by horses with varying backgrounds. The best thing about each of these races is that the planning has been in place for months.

Crossthestart started his career off in New Zealand before heading over to Melbourne where he was predominantly trained as a sprinter-miler. He then ventured north to Brisbane where Laming Racing would take over the son of Cape Cross. After a string of victories in Queensland up to 2020m, he returned to Melbourne with close seconds in the Bendigo Cup and Queen Elizabeth Stakes.

It was after his second in the Queen Elizabeth (back in November 2009) where champion jockey Damien Oliver declared that he would be the perfect Brisbane Cup horse. Crossthestart lines up in Saturday's Brisbane Cup as one of the main hopes. Good luck to his owner Dick Karreman.

Ringa Ringa Rosie (pictured) was targeted at the Group 1 TJ Smith immediately after she sailed past the winning post in first place on debut at Doomben. Remarkably, her debut victory was on the same day that Crossthestart finished second in the Queen Elizabeth.

Purchased for $46,000 as a yearling, Rosie has already returned a lot more for her owners with two wins, including the Listed Hampden Stakes. She will line up in Saturday's TJ Smith Stakes as the well supported favourite. Good luck to her owners Gerry and Stamatoula Carmody, Lynn Tipper and Jenny Laming.

Face Value contested the Victorian Derby as a three-year-old and after the slashing run by Face The Front over 2200m on January 2, the Queensland Derby was right on the radar. Good luck to his owner Jenny Laming.

Good luck to everyone who has played a part in getting each horse to this stage.