I'm The Fiddle get his timing right 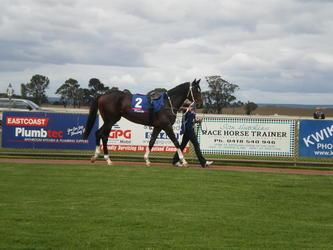 After sending a strong team to our local Victorian track on Sunday at Cranbourne, we were able to walk away happy after witnessing I'm The Fiddle (pictured) take out the country showcase handicap over 2025m.

The four-year-old son on Tale Of The Cat is only lightly raced and has shown plenty of promise however he is only now starting to put it all together on the racetrack.

A late maturer, I'm The Fiddle had managed a win and five placings from his fifteen career starts yet he had a habit of causing himself trouble during his races which cost him more victories.

With time and patience, those problems appear to have been forgotten as he has returned from a spell this time around with some impressive efforts. Stepping up to the 2025m trip for the first time this preparation, jockey Craig Newitt settled him in the back half of the field before managing to get him off the fence at the right time. Once they entered the straight, he was then able to unleash a strong finish to snatch victory right on the line.

The impressive victory is a sign that there are more to come, especially over the staying distances. As Sunday's race was a heat in the Middle Distance Country Showcase Series, he is now qualified for the final to be held at Cranbourne on Sunday July 24 and will be a great chance in that race.

Congratulations to his winning owners Geoff and Virginia Cook, Michael Hibbert, Marilyn Yates and Jenny Laming. There is no doubt this victory is extra sweet after the patience that you have all shown with him.