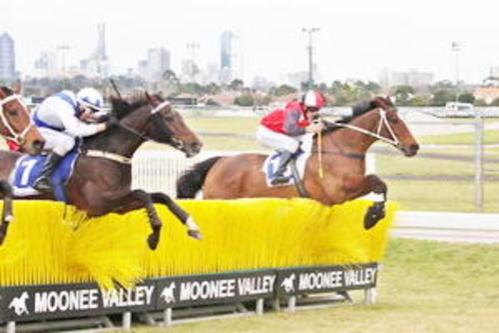 Ageless Jumping Warrior were the words used by on-course Broadcaster Brian Markovic as 10 year old War Dancer streeted his rivals in the 3650m Quality Steeplechase at Yarra Valley yesterday in what was an exhibition of outstanding jumping and pure endurance. Originally from the strong Brett MacDonald stable in New Zealand, Brett sent the horse to Richard and Bevan to prepare for the time honoured Grand Annual Steeplechase at the Warrnambool Racing Carnival in May. He never put a foot wrong yesterday and looked the winner a long way out beating impressive jumpers by 6 lengths eased to the line by race jockey Adam Trinder. His Grand Annual lead up has been faultless and he looks to be a serious contender in the race come 7 May. It was great to see Scott Brown, a loyal client and friend of the Laming Team so excited after War Dancer's win. He is on his way to Warrnambol for his first time this year with a serious chance of part owning the big one...The Grand Annual Steeplechase. Good Luck Scott.