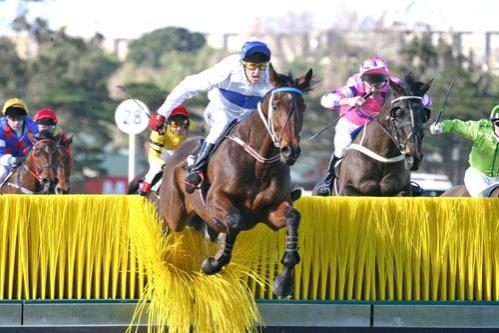 With the month of November coming to an end, Laming Racing is pleased to announce that a running total of $1,100 has been raised for the 'Movember' fundraiser.  While some of the participants (I won't name anyone) could not grow a moustache as effectively as others, all members of the Laming Racing have done themselves proud even though they looked terrible.  It is not too late to donate to this great cause, so please dig deep and help out men's health.

As you are probably aware, Racing Victoria announced on Friday that all jumps racing will come to an end after the 2010 jumps season.  This news is extremely disappointing for Laming Racing as we have always been strong supporters of the jumps racing industry.  We were fortunate enough to win the 2004 Grand National Steeplechase at Flemington with Mookta Heights and have always had a couple of jumpers in work each year.

We will continue to support jumps racing and will be targeting both the Oakbank and Warrnambool jumping carnivals in 2010 with horses such as Guara Grove Beast, War Dancer, Bashboy and Mr Smile.

In other news, Eclipse Stakes winner Bashful Girl has gone to the paddock for a well earned rest, she will come back in the Autumn for a tilt at some more black-type success in Melbourne and Adelaide.  Meanwhile, Ringa Ringa Rosie, our star debut winner in Brisbane is not too far away from getting back to the races.  She will have another two runs before going to the Magic Millions $2million race in January where she will be one of the main chances.