The Beast teaches his opposition a few tricks 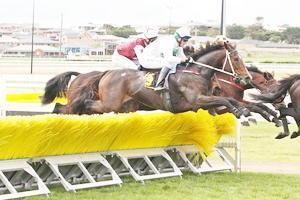 Punters could have been excused for dismissing six-year-old hurdler Guara Grove Beast when he was resuming from a spell at Sale on Tuesday.  He was up against some in form horses and obviously was looking for further and this is why he was sent out a despised 70-1 shot on the TAB.

Luckily horses do not read the formguide and after two very sound trials, Guara Grove Beast went into the race with a good fresh record and a liking for the Sale track.  He showed a little bit of dash out of the gates before jockey Brian Higgins settled him in a midfield position on the fence.

He snuck up along the inside in the straight and took a small gap and was too strong in the finish.  Even though he was first-up from a spell, he is looking towards a hurdling campaign at Oakbank and he had the miles in his legs.

The victory sets up what should be a rewarding preparation for Guara Grove Beast and his owners.  He now takes his career tally to 4 wins, 5 seconds and 7 thirds from 42 starts and almost $70,000 in prizemoney.

Congratulations to the winning owners Bernard Terhorst and Geoff McGregor.

The victory caps off an excellent week for the stable.  A win from stable newcomer Schwarzer at Mornington and a treble on Australia Day to Guara Grove Beast, Fly With Me at Doomben and True Vision at Balnarring.