Our spring stars are not too far away 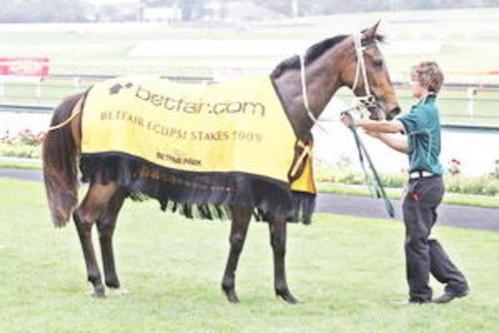 Bashful Girl and Crossthestart, our stars from the 2009 Spring Carnival have been back in work since January and are both set to resume shortly.

Bashful Girl enjoyed her best preparation last spring which ended in her taking out the Group 3 Eclipse Stakes at Sandown.  That victory gave her the elusive black-type that will ensure a lucrative career at stud after her racing career, but why should we stop at just the one group race?

She has returned to the stables in great order and will be aimed towards the Melbourne and Adelaide carnivals around the 1600m distances.  Good luck to her owners Ian and Kathryn MacDonald and Chris and Joanne Sleigh.

Crossthestart stamped himself as a very promising stayer after winning four races in Brisbane before heading down to Melbourne where he finished a close second in the Bendigo Cup and the Queen Elizabeth Stakes.

He keeps improving and is set for a big campaign which includes 2 or 3 runs in Melbourne before heading back up to Queensland where he is being aimed at the Brisbane Cup in the Winter.  If he was to hold his form from the Spring, that would certainly be within reach.

In other stable news, popular horse Benelli will be second up from a spell on Saturday at Flemington over 1400m in the Listed Melbourne Food and Wine Plate.  He resumed with an excellent run in the Listed Hareeba Stakes at Mornington and leading jockey Damien Oliver will stay on board this week.  Good luck to owners Michael Mannion and Jenny Laming.