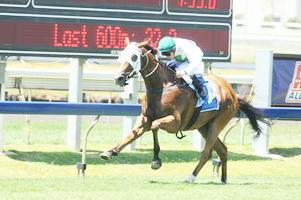 Talented three-year-old gelding Fly With Me is starting to make a habit of winning lately and managed to do it again on Saturday at the Gold Coast, albeit this time sharing the major prize in a dead heat.

The son of Flying Spur has now won three of his last five starts and takes his career earnings to more than $43,000.

After resuming from a short five week spell, Fly With Me was sent out as the outsider in the small field of seven however that didn't deter jockey Joe Bowditch who was positive from the barriers sending Fly WIth Me to the lead.

Although headed in the straight, Fly With Me did not lay down and kept fighting right to the line to finish tied with the second outsider of the field.  In his past two victories, Fly With Me has had to pull out all stops to win and that is a great quality in any racehorse.

In other stables news, the team was particulary impressed with the run of Naadji who was second-up after a long spell due to injury.  He finished the race off strongly over an unsuitable distance and is now ready to show his best.  Look out for him at his next start.