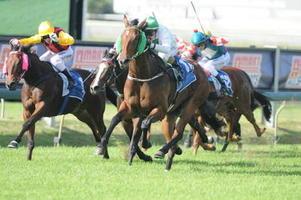 Sent out as one of the main chances, Rosie enjoyed a good run in the second half of the field and began to produce her trademark strong finishing burst in the straight.  Just when she looked like the winner, she was grabbed late by the colt Pressday.

After earning another $100,000 cheque, Rosie now takes her career earnings to just over $238,000 in only seven starts.  Her value as a broodmare in the future also continues to soar.

She will now head to the paddock for a well earned spell as a black-type winner and Group 1 placegetter.  The next time we will see Rosie will be as a three-year-old where she will be targeting the lucrative fillies races in the Melbourne Spring.