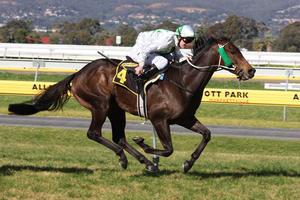 Our weekend trip across the border to Adelaide proved to be a good one with promising young stayer Face The Front (pictured) recording his second career victory.

After jumping from barrier 1, leading apprentice Jarrod Fry settled Face The Front in a comfortable position and produced a copybook ride where he never left the fence. The son of Face Value then fought off all challengers and outstayed his rivals to win by 1 1/4 lengths.

Face The Front now takes his career earnings to more than $45,000 in 16 career starts. As his time as a three-year-old is coming to a close in two weeks, we might see him tackling a similar race before he gradutes to open age races next season. Congratulations to his winning owner Jenny Laming.

The trip to Adelaide also saw a quick return to form for Chiefcomingfirst who was narrowly beaten in the 2500m handicap. After hitting the lead in the straight, he was nabbed late by the short-priced favourite and officially beaten by half a length.

Chief appreciated the firmer surface compared to his two recent runs on heavy tracks in Melbourne. He will now turn his focus to getting qualified for jumps racing where we expect him to give plenty of enjoyment to his owners.

In other Laming Racing News, we have now joined the popular social networking site Facebook. For anyone who has an account, make sure to add 'Laming Racing Stable' as a friend to receive regular updates on what is happening around the stable.

Many thanks to photographer Jenny Barnes who took this photo of Face The Front winning at Morphettville. She is at the races every Saturday in Adelaide, to browse her extensive library, go to www.barnesphotography.com.au