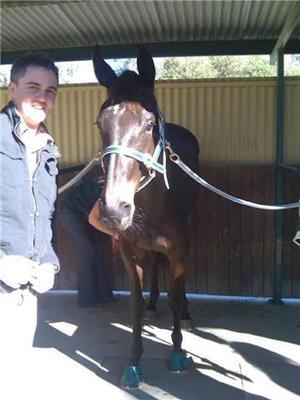 As a new racing season begins, it is a little frightening to think that another spring carnival is already on our doorstep.

Last week the nominations for the feature races of the Melbourne spring were released, we will be represented by a small team however we are confident that they will perform well.

Headlining the spring team will be top filly Ringa Ringa Rosie. She has already created a big impression in her short career, taking out the Listed Hampden Stakes and being a close second in the Group 1 TJ Smith Stakes at her most recent start. She is set to resume later this month in Queensland before heading south for races such as the Thousand Guineas and VRC Oaks.

Another promising filly who will be targeting similar races is Ms Brown (pictured with one of her owners Nick MacDonald). She didn't take long to show her ability, winning on debut at Wangaratta. Ms Brown has since enjoyed a short break and is set to resume on the weekend. The VRC Oaks will be her main target as she is bred to stay and is a nice relaxed filly.

Our other two entrants are Naadji in the Melbourne Cup and Bustaringer in the Caulfield Guineas. Naadji is a promising stayer and is set to resume from a short break on Wednesday at Eagle Farm while Bustaringer has plnety of ability and is a few weeks away from getting back to the races.

In other news, we welcomed two new additions to the stable last week from New Zealand. Al Saqeer and Donostia are both lightly raced mares who look as though they will both measure up in city grade in Melbourne. While all the shares in Al Saqeer were quickly snapped up, there are still a couple left in Donostia. For any enquiries, please contact David via email david@lamingracing.com.au

We are also looking forward to seeing a number of young horses make their racetrack debut over the coming weeks in both Victoria and Queensland. Make sure you keep visiting the website to keep on top of all the action.