Rosie sees Brisbane off in style 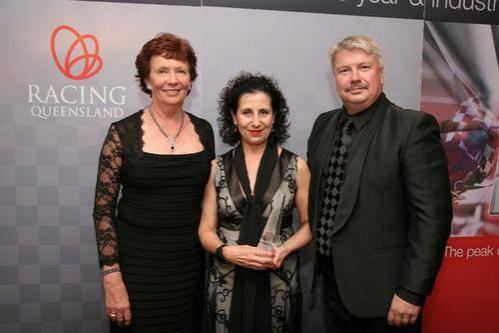 Our website could be criticised for mentioning the name Ringa Ringa Rosie a few too many times, however if you witnessed her victory at Doomben on Saturday, you would understand why.

After a fantastic winter carnival which ended in a second placing in the Group 1 TJ Smith Stakes, the daughter of Bradbury's Luck was sent out a popular favourite by the punters. It was never going to be easy though, she was up against older mares with solid form.

Jockey Chris Munce was settled well back in the field and once the gap appeared in the straight, the result was never in doubt. Ringa Ringa Rosie showed great accelaration to win by three lengths.

Rosie will now head straight to our Melbourne stables where she will tackle the feature fillies races such as the Group 1 Thousand Guineas at Caulfield and the Group 1 VRC Oaks at Flemington.

In another highlight for her owners, Ringa Ringa Rosie was later crowned champion QTIS two-year-old of the year at the Queensland Racing awards night. All of her owners were on hand to accept the trophy, including Lynn Tipper and Stamatoula Carmody who are pictured above. (Many thanks to Ross Stevenson for this photo, you can see his great range of racing photos at http://www.qldracingphotos.blogspot.com/)