Get ready for a big weekend 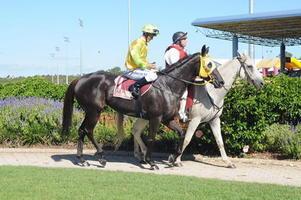 It's that time of year again as we plan another assault on our hometown cup meeting. The Cranbourne Cup is one of Country Victoria's more popular meetings and it attracts big crowds, big fields and plenty of city-class horses.

This year we attack the meeting with four horses and although we are not represented in the cup, each horse will represent our stable well.

Bustaringer will be the first to step out and this will be the first time we see the son of Magic Albert since his debut in April. As is the case with many young horses, he pulled up shin sore after that run at Sandown but has put those problems behind him and is raring to go.

A victory would be great to all his owners, especially managing owner Ben Dougall who welcomed Charlie, his second child and first son into the world last week. Charlie has already proven to be a good luck charm by helping Collingwood win a premiership, and hopefully that luck can continue on until Sunday.

Another son of Magic Albert, Awesome Glitch will make his debut over 1300m in race 2. He has taken time to mature and will continue to improve as he gets over more ground. This is the first horse that his owners have had with our stable so we welcome them on board. Good luck boys.

Lamichi will line up in race 4 after a string of consistent performances. Now that she has had a few runs under her belt over the longer distances, she will be ready to fire. It looks to be a very competitive race however she will go into the race at her peak and will be a good each-way chance.

The last of our runners will be Hindsight in race 5. Hindsight (pictured) is well bred being a half-sister to the excellent sprinter Mitanni. She had her first run for the stable at Sandown recently and showed that she is ready to win with a great effort.

Rounding out the Cranbourne line-up will be top filly Ringa Ringa Rosie who will be on display having her final fast gallop before next Wednesday's Group 1 Thousand Guineas at Caulfield.

Good luck to all of our owners and all the staff who put in hours after hours of hard work to ensure that these horses run at their best.