Laming Racing finish the day on top in two sports 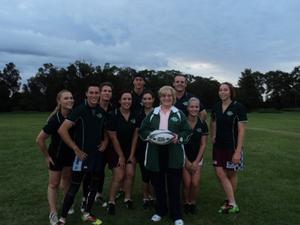 Saturday proved to be a very productive day for the Laming Racing team as we celebrated two winners.

Our Recidivist, a four-year-old son of Al Maher was having his first start for our stable at the Gold Coast and he didn't take long to make a positive impression.

After having six starts in NSW, Our Recidivist broke his maiden status over 1400m with a good ride from leading young apprentice Bradley Wallace. After jumping well, he settled in a midfield position and made his move around the turn. Wallace drove him to the finish line to record a comfortable one length victory.

Our Recidivist is owned by new clients to our stable in Bob Green and Nick Posa. Congratulations to you guys and let's hope there are many more winners for this combination in the future.

As Bevan was busy leading in a winner at the Gold Coast, his co-captain Jenny was elsewhere to oversee a victory of a different kind. Jenny was on hand to witness the Laming Racing sponsored touch football team "Focus" win their second grand final in as many years with an 11-2 thrashing.

The team is made up of both boys and girls from the Jacobs Well area in Queensland including Bevan and Jenny's granddaughter Jessica. As many local sporting teams find it difficult to raise the money for uniforms and other equipment, Laming Racing chipped in with the uniforms and as you can see from the winning photo, they look great.

Well done to the whole team, with a special mention to Julian who was named best player in the win.