The Inventor creates some magic 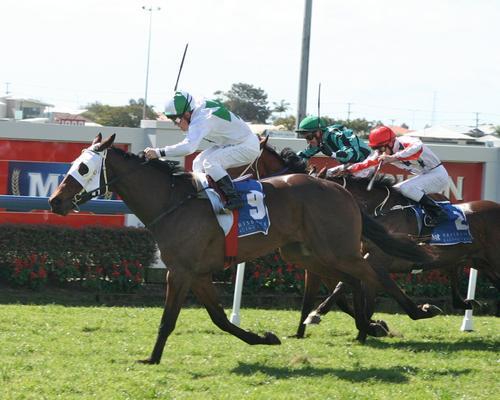 It's now August which means the start of a new racing season and Laming Racing kicked off 2011-2012 in great style at Doomben on Saturday with a victory from a promising youngster.

The Inventor, a son of Stradbroke Handicap winner Danasinga, had shown good ability in his only two racetrack appearances prior to Saturday, and was stepping up to the 1600m for the first time and he relished the extra distance.

Jockey Chris Munce settled The Inventor (pictured) back in the field and as the field sprinted before the turn, he took a little while to gain momentum before unleashing a strong finishing burst down the outside to record an impressive 1 1/4 length victory.

Saturday's win suggested that he will continue to improve as he gets over further distances. Having just turned three, it is a great time of year for a young stayer to be in top form with plenty of lucrative races ahead in the spring.

The Inventor is another success story at Laming Racing for a horse who has already repaid far more than their purchase price. His mother, Inventions was purchased by Laming Racing at a Gold Coast Magic Millions Broodmare Sale back in 2008 for only $3,000. At the time of sale, she was in foal to Danasinga. This produced The Inventor who has already taken his career earnings to $33,000 in just three career starts.

Congratulations to the whole Queensland team, let's hope that this will kick start a great season ahead.

Also, special thanks to Dan Costello for this photo taken at Doomben on Saturday. Dan can be seen at the Brisbane races every Saturday and takes some great photos. Check out his library at www.racingwrap.com