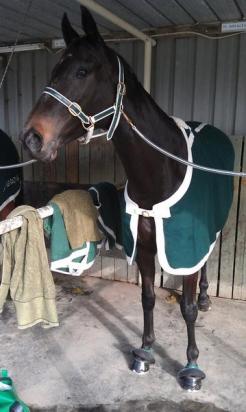 The freezing foggy winters day at Mornington yesterday was made a whole lot brighter with Moxie Air and Mrs. Elle, making it a winning city double for the stable.

Moxie Air was the first to salute, narrowly winning his 1500m maiden by a nose. Ridden by Danny Nickolic he made a long sustained run home from the 1000m to just run down Glory Man right on the line.

Unlucky not to have won a race before now, Moxie Air has always been thereabouts, being placed 5 of his 12 previous starts. Expected to be more competitive over the longer distances and with the confidence of a win behind him, we look forward to seeing him back in the winners stall again soon.

Next to hit the track was Mrs. Elle. Originally down to race at Pakenham last week that meeting was abandoned due to the weather. Thankfully Bevan had thought ahead and entered her at Mornington as plan B.

Luck still didn't seem to be going her way being a 4th emergency for the race and drawing the outside barrier it wasn't until that morning that she actually secured a start.

After a lengthy lay off due to a fractured carpal bone behind her knee and a preparation that had been disrupted due to rain nothing seemed to be going smoothly for the 4yo mare. (pictured)

Ridden by apprentice Brad Wallace she came into the race nicely with 52.5kg. The outside barrier became a blessing on the very heavy track and with her light weight and being ridden wide not getting bogged down she won dominantly by 2 lengths. Rewarding her owners for their patience in her recovery with the extra prizemoney for a metropolitan win.

Congratulations to all involved, its great to see the team back in the winners circle !