Sixteenth Street Backed Off The Map 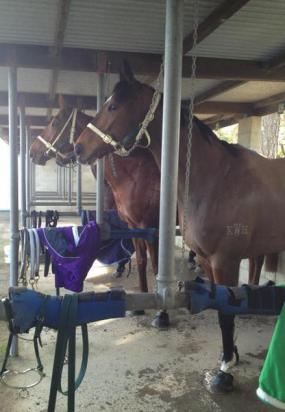 One of the more recent acquisitions to the Laming Racing Team is a four year old mare by Catbird named Sixteenth Street.
Originally trained at Warwick Farm the lightly raced mare came to the stable with only 2 race starts. Both being at Kembla Grange and neither resulting in much success.
Being of a very finicky nature, especially when it came to her food, she soon adjusted to the way of life offered at the Jacobs Well stables and settled in well. After her daily morning exercise in the relaxed rural settings she would be put out in a paddock for the day with her feed to enjoy the sunshine.
Her first start for Bevan was in a Maiden for Fillies and Mares over 1350m at Ipswich. Jim Byrne took the ride. The track was rated a Heavy 10 and minutes before her race the track was inspected as it was just so wet and could have been deemed dangerous.
Thankfully though the meeting continued on. Opening at $18 the punters backed her into $5.80. Sitting just off the pace, Jim hooked her clear at the top of the straight  and as the field battled it out in what looked like slow motion in the bog conditions over the last 200m she managed to win by just under a length.
She pulled up well after that race on what Jim Byrne described as a "bottomless" track and we look forward to seeing her back at the races again soon.