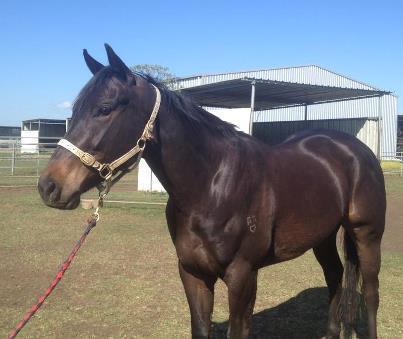 Promising young horse Face The Breeze has been the most recent member of the Qld stable to grace the winners stall. Friday, being a public holiday in celebration of the Gold Coast show resulted in the races being held on the same day.

Coming out of barrier 1 over the mad dash distance of 900m regular stable rider Ashlee Mundy had him sitting 4th one off the fence, releasing the brakes at the top of the straight to stride away to an easy 5 length victory.

He is a lovely type of horse sired by the once stable star Face Value who now stands in Oakbank South Australia for a modest $2200. Making him great value for money after fathering horses such as SAJC Sires Produce Winner Silent Surround, and his latest star Dream Face who had been racing successfully in Darwin before being sent to Melbourne for a crack at the big time, where she won dominantly at Caulfield on Saturday.

Sired by Face Value and out of the Dam, Fly Me Home, who was also trained by Bevan during her racing career she also looks to have a promising future. Here's hoping, as there is a lovely un-named half sister by Dehere in the Laming yard which has just turned 2yo, who has hopefully been blessed with the same ability!