Gigolo Has A New Ambition.... 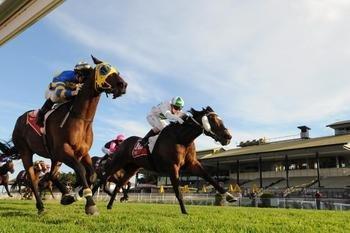 The latest horse to do the stable proud was the 5yo Flying Spur gelding Gigolo Volante. Having his first start for the stable after transferring from NSW the lightly raced horse appreciated the laid back lifestyle the Laming Team offer and thrived in his new environment.

Becoming relaxed in his demeanour, Bevan was able to tweak the gear the horse previously raced in, removing the blinkers, hanging bit and tongue tie, replacing them with a crossover noseband and winkers which Bevan has had a lot of succes with over the years.

Originally entered to race at Eagle Farm on October 31, Bevan, thinking the horse a little under done decided to give him another week of work before racing.

Having his race day Nov.7 at Eagle Farm in the Class 3 for Colts and Geldings over 1200m. Gigolo raced kindly for young apprentice Rosie Myers allowing her to settle him midfield before steering him into the clear at the 300m to run down the much more favoured runner, the inform Brampton right on the line.

Covering the 1200m in a slick 1.10.3 and that time being run in his first race start since May, the stable was excited about his future, which was unfortunately dealt a blow with a tendon injury which may explain as to why he was lightly raced to begin with.

With the recovery time of such injuries being quite lengthy, he will now be having an enforced career change and will most likely next be seen retrained as a show horse.