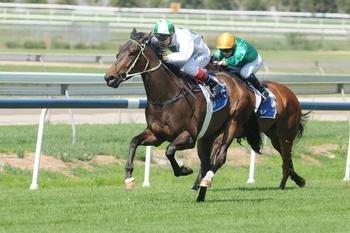 If you have been following the Laming Stable in the last week, you will certainly be all cashed up ready for Christmas! I must say my Centrebet account never looked so good, EVER!

The first horse to kick off the winning was the relative newcomer I Am Sure in the first race at Ballina on Saturday. Having only her 3rd race start, the little surprise package showed great heart to win. Her sire is Rapid Man who was also trained by Bevan so he has a good understanding of the breed.

Another runner at Ballina on the same day was the promising Face The Breeze who didn't show much gate speed on the day, which basically lost him the race. Flying down he outside late for 2nd, he was unlucky not to win.

Meanwhile, back at the Gold Coast, the Royal Saga 2yo, Solo Saga was lining up for his debut over 900m. Racing keenly and getting on heels at one stage he nearly fell but Dale Missen stayed cool and rebalanced the horse to come away with an impresive win.

Wednesday at Doomben saw the unveiling of two more debutantes. The first being the 3yo Al Maher gelding Alangejack. Deriving his name from his three enthusiastic and highly excited owners Alan, Angie and Jack,he was ridden positively from barrier 2 by Jim Byrne to just get there on the line by the narrowest of margins,leaving most punters mortified paying $19 on the tote in Qld.

Next to strutt her stuff was the 3yo Dylan Thomas filly Poets Wish. Bred by Dr. Denis Obrien she is out of an extremely talented mare that Bevan had trained before going amiss, depriving her the opportunity to show her true ability on the racetrack. Much like her mother in her appearance,Poets Wish jumped well to be just outside the leader. Travelling keenly, Michael Cahill then released the brakes allowing her to stride home, running her last 600m in a slick 34 seconds winning comfortably by a length and a half. Her win kicking the punters while they were still down from the race before, paying a lovely $11.

To besuccessful a stable needs fresh young horses coming through the ranks and it certainly looks like a promising future for these latest recruits, especially coming into an exciting time with the Magic Millions Carnival in 6 weeks!