The Inventor Loses His Chips. 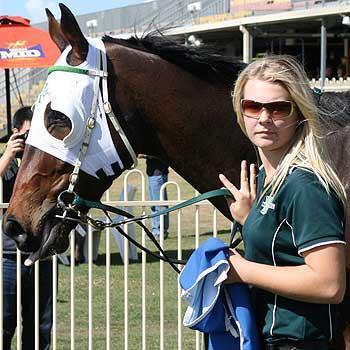 After a lengthy absence from having any of the team saluting the judge, the run of extaordinarily bad luck was finally broken on Wednesday April 3rd at the Gold Coast. Only starter for the day, The Inventor did the stable proud and hopefully swayed the momentum back into a more positive direction.

The lightly raced Danasinga gelding is the progeny of a mare called Inventions which was purchased by Bevan in foal with him for the bargain price of $3000 at the Magic Millions Broodmare sale back in '08.

He showed plenty of promise as a late 2yo,before winning his first race after just turning a 3yo over 1600m. Shortly after xrays revealed bone chips in one of his joints. They were removed and he was allowed a lengthy time to recover. Upon his return to the track, he performed poorly with xrays revealing he had bone chips in the other joint now. These were removed and he was once again out in the paddock for a substantial amount of time.

Finally he is back and chip free with his performances reflecting that. He has had 3 races this time in all with 4 weeks in between. On Wednesday he was jumping from 1200m at Eagle Farm 4 weeks prior to 1800m. With Michael Cahill onboard, he was sitting back off the pace before starting to make a run about the 900m mark. He took awhile to wind up and hit his straps but managed to just get there on the line to win by a head. Making his supporters very happy, especially the ones that backed him at $26.

Hopefully his career now continues problem free and  he is back in the winners stall soon!